The disappearance of Sayyid Musa Sadr in Libya

Sadr or Sadr Ameli family is a branch of Sadat from the descendants of Seyyed Saleh Mousavi Ameli, headed by Seyyed Sadruddin Mousavi Ameli. This family is a descendant of Imam Musa Kazem (AS) and one of the famous religious families in Iran, Iraq and Lebanon.

Al-Sindī b. Shāhik (Arabic: السِنْدی بْن شاهِک) is among famous figures during the rule of Abbasids. He was the guard of the prison of Imam al-Kazim (a) and treated him harshly. With a mission he had from Harun al-Rashid, he finally killed Imam (a).

There is no information about the date of his birth. About him, it is said that al-Sindi was not Muslim and was Jewish; and in his prison, Imam al-Kazim (a) suffered a lot.[1] It is reported that he was ruthless and wicked and away from all moral values. About his harsh treatment of Imam (a), it is reported that he treated Imam (a) with cruelty, harassed him upon eating and drinking and tied him in chains.[2]

Many were involved in removing Imam Musa Sadr from the political scene. But his enemies used Gaddafi’s jealousy and hatred.

This is the story of centuries when the criminal uncle of the Prophet of Islam “Abu Jahl”,

He persecuted the Prophet of Islam at the instigation of the Jews.

In the name of Allah the merciful and the compassionate.
۱
YUSUFALI: Perish the hands of the Father of Flame! Perish he!
۲
YUSUFALI: No profit to him from all his wealth, and all his gains!
۳
YUSUFALI: Burnt soon will he be in a Fire of Blazing Flame!
۴
YUSUFALI: His wife shall carry the (crackling) wood – As fuel!-
۵

YUSUFALI: A twisted rope of palm-leaf fibre round her (own) neck!

The result of brainwashing.

No one has the right to be anti-Semitic or Islamophobic.

But the story is not just about Jerusalem at all .. It is a story of resentment and jealousy that started with the killing and torture of the prophets of old Israel and after that Jesus and his mother ………….. Who killed them? We all know the answer to the question.

They do not know what to do with their illness
But we know that they have no hope for their fate, so they commit a serious crime and justify it. 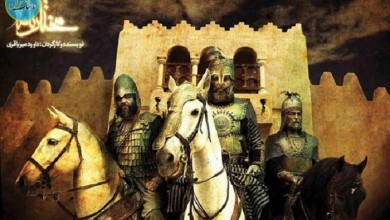